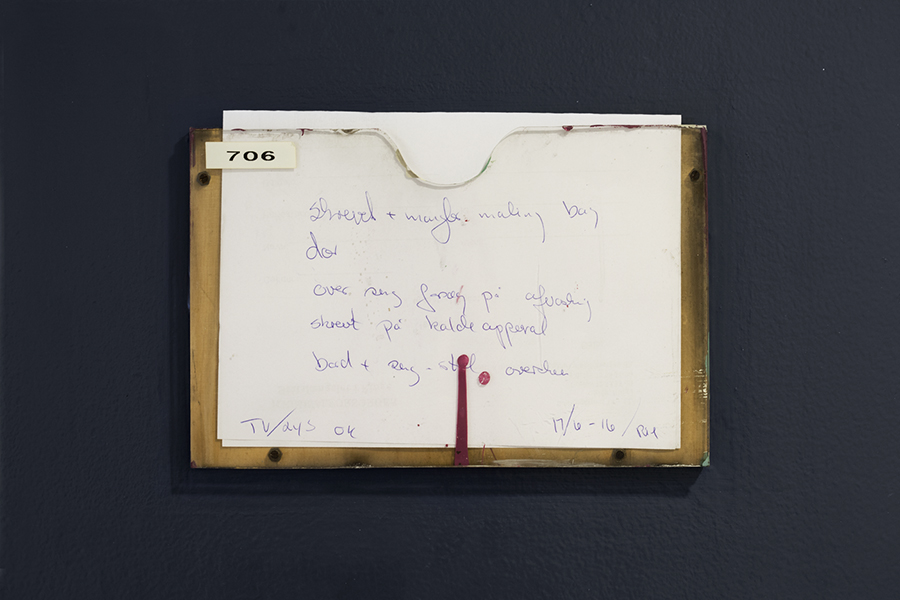 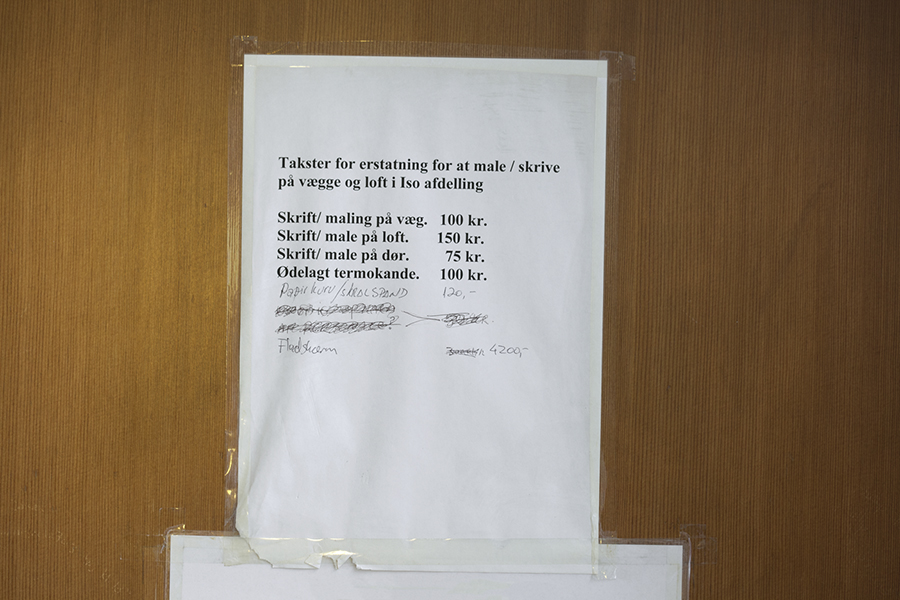 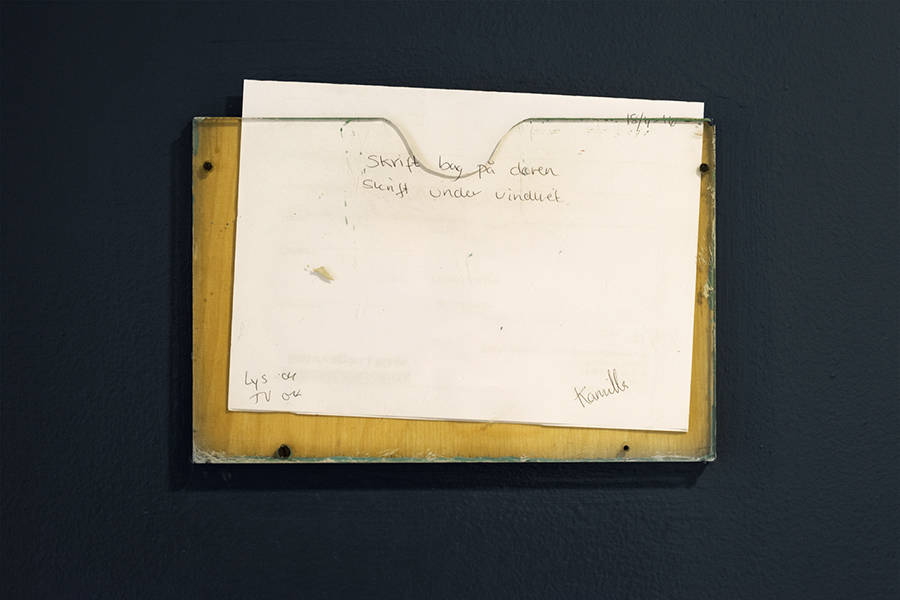 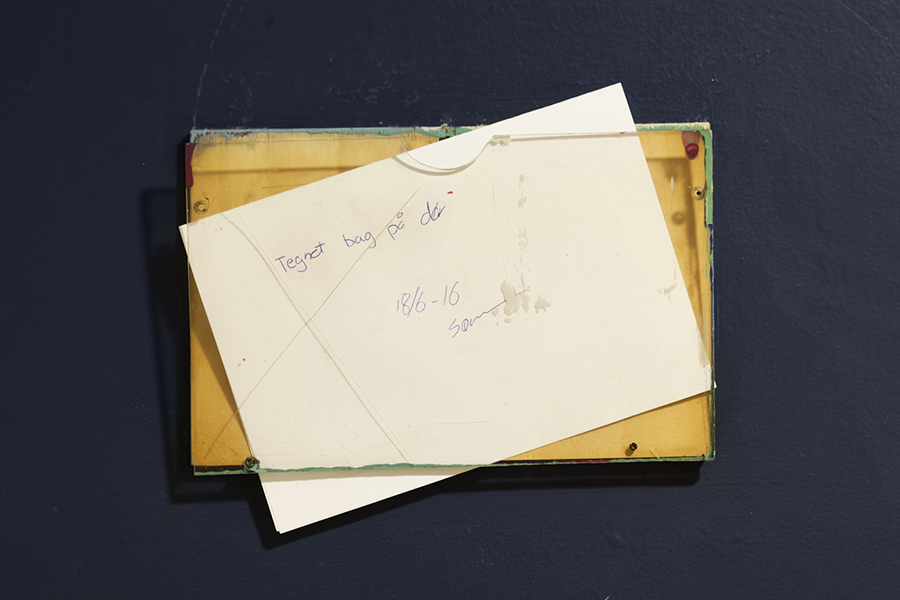 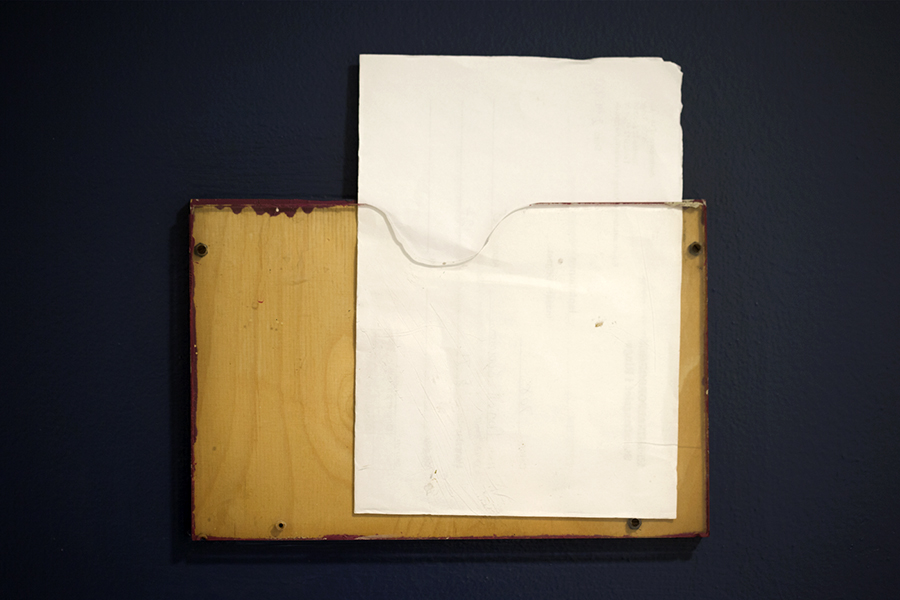 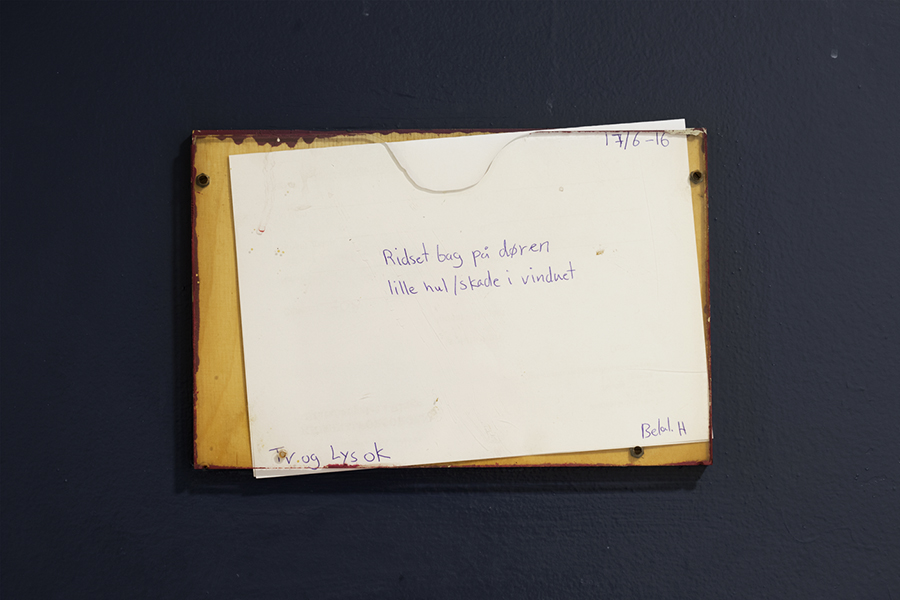 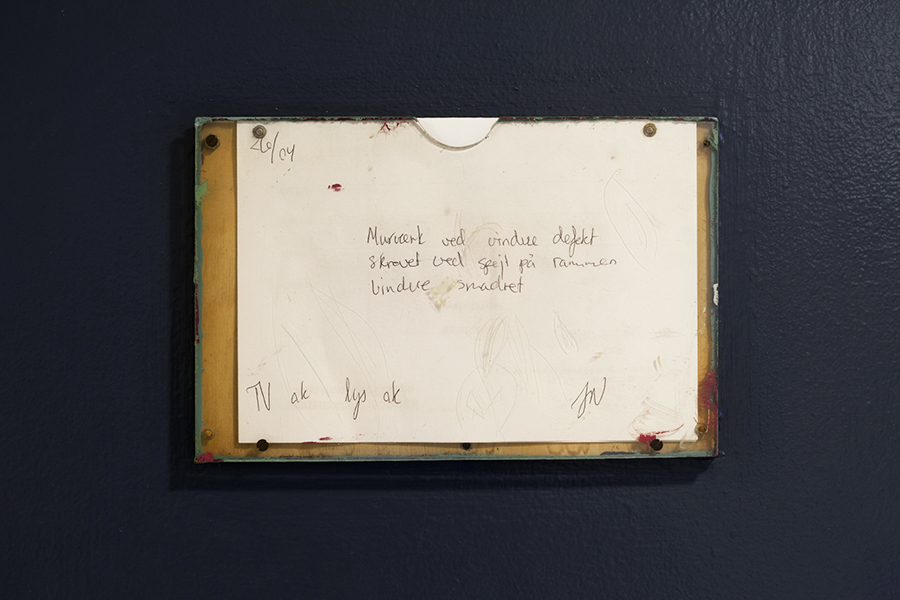 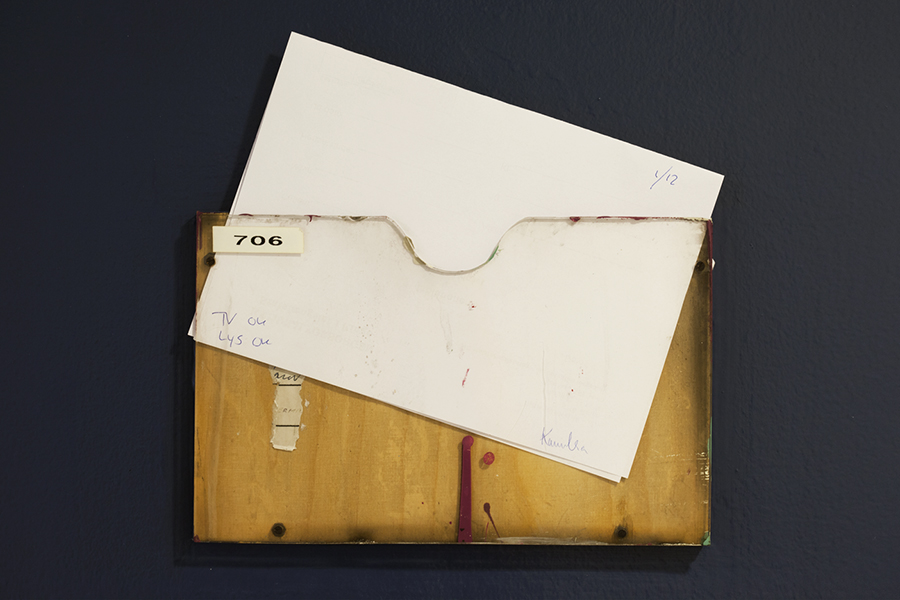 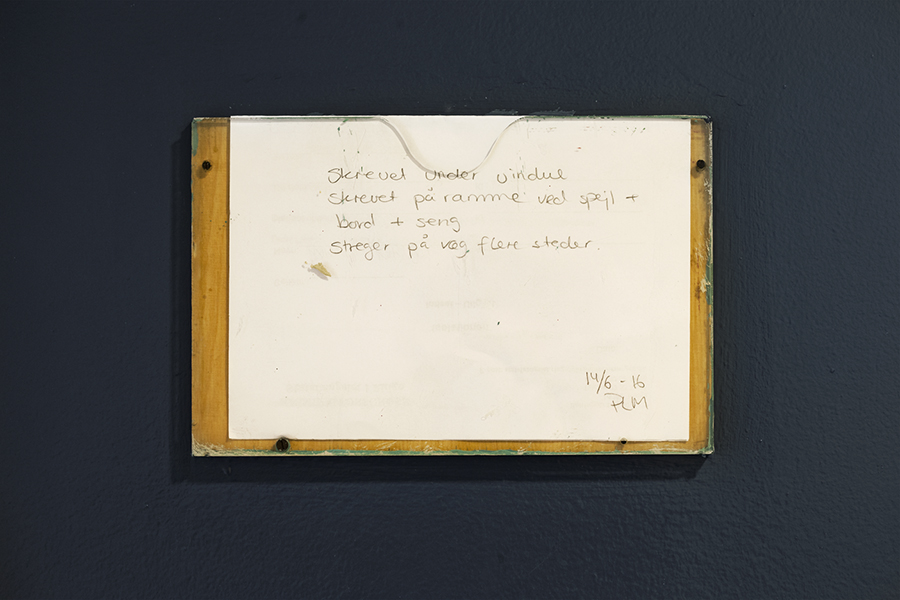 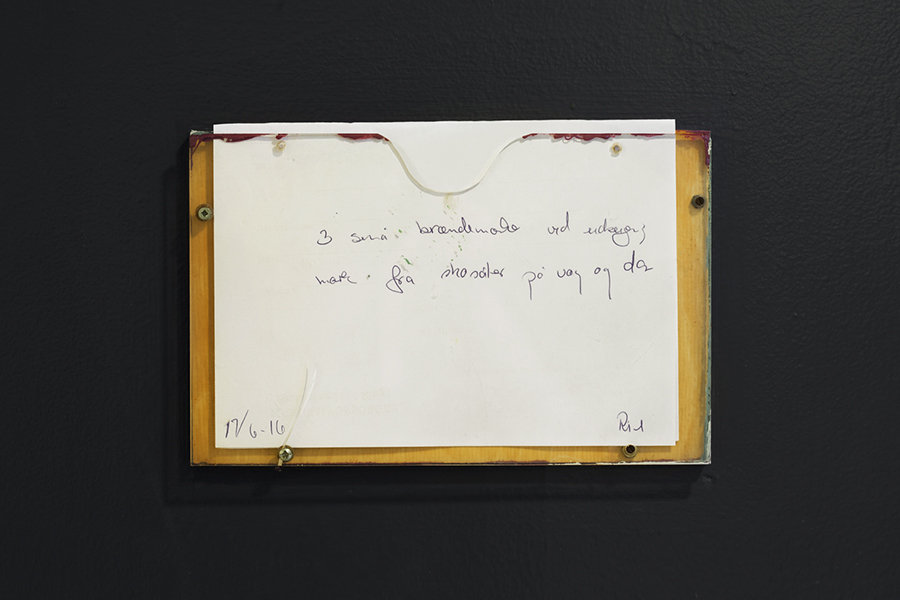 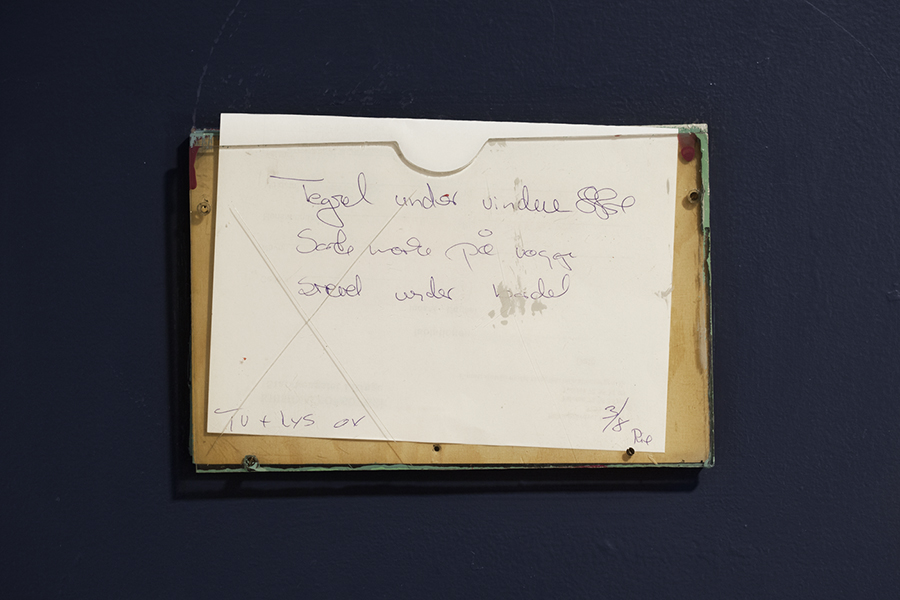 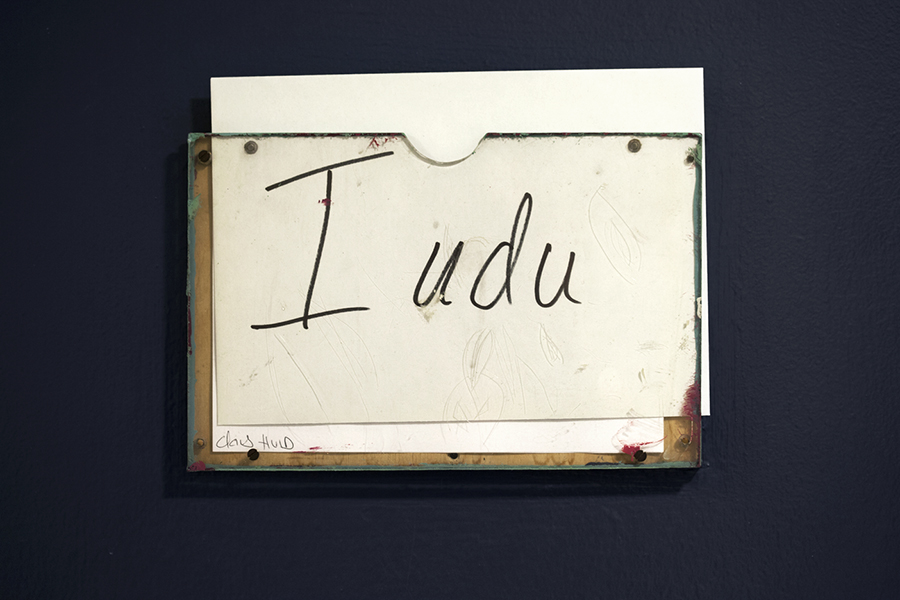 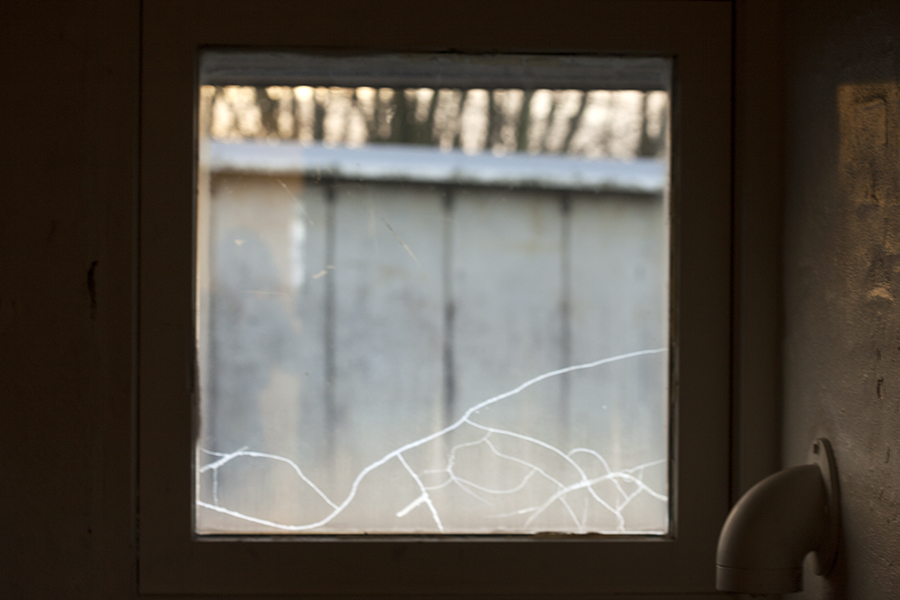 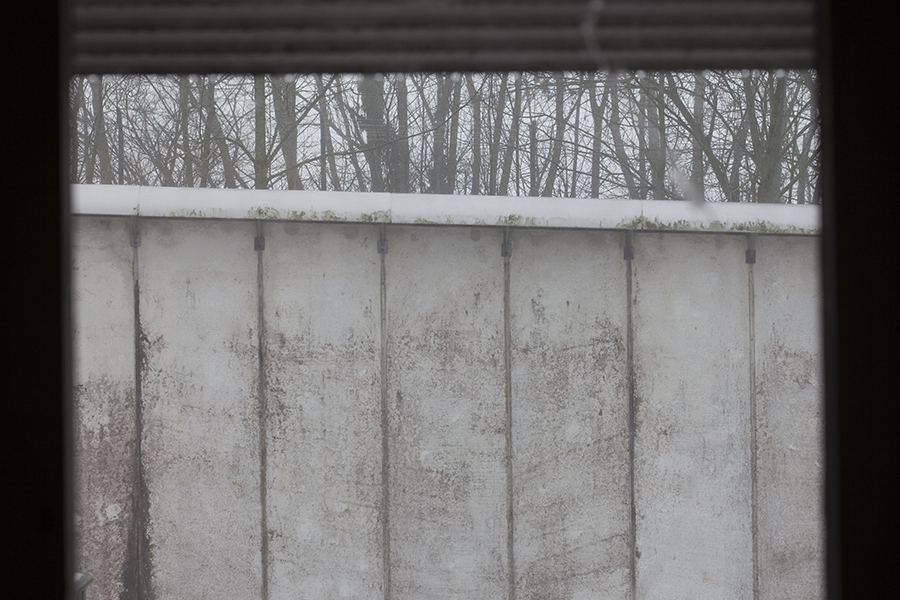 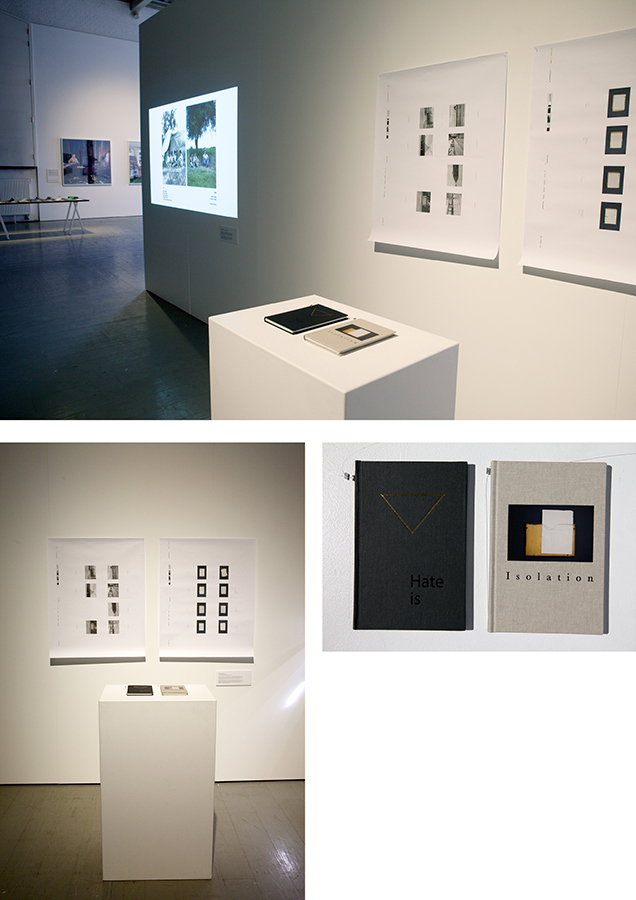 Hate is / Isolation, 2017. Part of the exhibition Bending the Frame, Fotografisk Center, Copenhagen 2016.

Isolation, 2017. Compensation rates for painting/writing on walls and ceiling in solitary confinement.

Hate is / Isolation, 2017. Part of the exhibition Bending the Frame, Fotografisk Center, Copenhagen 2016.

[...]
As a final example of Enghoff’s social documentary practice, her most recent project about solitary confinement in Denmark leads to an understanding of how photography operates as a multifaceted visualization of inequalities in a European model state, while avoiding the pitfalls of the traditional social documentary genre. Isolation probes ideas about Scandinavian exceptionalism, state registration and the surveillance complex. The photographs in this project were taken in 2015–16 at Ringe state prison. The prison is the only institution in Denmark with solitary confinement cells where prisoners are isolated up to 23 hours a day. The project consists of 32 photographs of handwritten notes that a prison guard posts on the door of the cell each time a prisoner exits.10 The notes are records of any marks or damages to the sparsely furnished cells, which will result in fines. Thus the registrations are part of the punitive system, with the fines adding to the prisoner’s punishment. One note, for example, registers ‘scratches under window, black mark by intercom cable, writing under cable, scratches on windowsill. New TV. Lights OK’. The notes are dated and signed by the guards, whose individual writing style and commentary are the focus of the images. The photographs are repetitive: a handwritten note in a simple plastic and wooden holder on a dark blue door. Similar to the 26 blood vials in Migrant Documents, the seriality shows Enghoff’s use of photography to collect a quantity of traces, which the viewer is invited to interpret. The notes on the doors in individual handwriting register the topography of the cells and the details of graffiti on window panes, as well as scorch marks on the ceiling. At the same time, however, the selective registrations only record the prisoners ‘violations’; they leave out all the other details of the room that might evoke a sense of the solitary confinement cell as a violation of the human by the state: for example, the sparse, bolted-down furniture, the smell and the sounds (Nygård, 2017). The graffiti, scratches and cracks in the windows represent the prisoner’s own imprints and markers of the spatial extension of their cells. As Prison Chamberlain, Kamille Nygård, who collaborated with Enghoff on this project, writes, the prisoners who carve letters into the edge of the bed or methodically pour coffee on the walls ‘scratch the skin of the institution that affects to feel nothing’ (Nygård, 2017: n.p.)

[...]
In the act of photographing the notes, Enghoff establishes a metonymic link between the prisoners’ gestures and imprints, and those of the guards, which she then makes public to viewers outside the prison. This series can be interpreted as a form of counter-surveillance or sousveillance signifying the act of looking back at, and exposing, monitoring processes of power (Mann and Ferenbok, 2013). Together with the inmates Enghoff never meets, she creates a documentation of the everyday disciplinary and punitive practices employed by the incarceration system. The second part of the project comprises photographs of the views out of the security windows of each of the seven confinement cells. The views are represented as almost identical, with an outer wall taking up more than two-thirds of the image, treetops visible above the wall, and a glimpse of the sky. In some of these images, a faint shadow of a figure is reflected in the window and cast on the outer wall. The shadow is the discreet appearance of the photographer herself taking the picture from the door into the cell. Thus, Enghoff inserts herself temporarily into the space, which not only suggests an embodied documentarist, but also an ambition to share the gaze and viewing position of the isolated prisoners. She does not pretend to tell their story, but rather observes the traces made by them, and records her act of observation: in several of the cells the bulletproof window has been scratched or even cracked by the prisoner. This manifest trace of anger or desperation further marks the prison cell’s boundaries and, in the context of Enghoff’s project, is an exposure of the illusion of the photographic representation as a ‘window’ to the world. These abstract scratches become unsettling elements in the image; they stymie the viewer’s gaze, and in turn open the image to instability and uncertainty. This is an example of what makes Enghoff’s photography refuse to decipher and explain the collected traces in a lucid narrative: she presents us with traces the intelligibility of which she cannot guarantee, but which hold the potential to further incarceration.

Example of some captions following the photographs:

‘Fuck THE’ scratched on intercom
Scratches on back of door